Street art isn’t limited to the street itself. It grows up and around walls, on the sides of buses and subway cars, the trunks of trees, and even on traffic signs and lights. Any kind of outdoor public medium can be morphed to express a message through the artist’s vision.

When we think of graffiti, the words slanderous, defiling and rubbish may come to mind.  A lot of street art has an obvious, or sometimes very subtle, anti-establishment hint in it. Street Art from the Islamic Republic of Iran is by no means different, it has become part of city’s landscape, delivering strong messages symbolically to everyone around.

The powerful messages of peace, love, and hope in a country torn apart by internal conflicts are represented by Iranian street artists through their art, and mostly these works grow in all endless direction, both metaphorically, conceptually and physically.

Filmmakers Zeinab Tabrizy and Paliz Khoshdel decided to start the initiative through their film Mutiny of Colours, to give the world the perspective from the Street Artists view.

Street Art in Iran is viewed very much the same way the rest of the world views Graffiti Artists.  The public and government believe that they are out to destroy property and make a nuisance of themselves, that their works reflect a Satanic and evil expression.

Iranians are not spinsters on expressing their feelings on all aspects of political, social and cultural aspects of their life.  The Iran Islamic Revolution in 1979, as well as the Iran Green Movement of 2009, saw many Iranians marching the streets, voicing their opinions and plastering the walls of Iran with their effectual messages.  This, according to the Street Artists, is similar to how they are communicating their thoughts and vision while maintaining their way less violent and more influential.

By using the medium of art they feel they can reach a greater audience and influence a wider band of people.

Through the movie, the Directors have approached various Street Artists, who has stronger reasoning behind their beautiful and powerful depiction of their messages.

Five artists were identified as the main contributors to the film and while they hide their faces behind masks, when being interviewed, in fear of being arrested, they are resolute in bringing their compelling messages alive through their skill. Each of these five artists has a very different message and a manner in which they express it on the walls and buildings of Iran.

One of the main contributors is CK1, who, by using Iranian literature shows his anti-war stance.  Omet draws on his childhood, stating that because he was born in the time of Iranian upheaval, he wants to reach out to the youth in the community.  Brothers, Icy and Sot, are all about peace and friendship.  And finally Lady Green reveals the synergy between government-sanctioned murals, over times of war and discord, to her graffiti-style work.

Many famous artists have supported the film’s passion and purposes, such as Faith47, Isaac Cordal and Blu, to name but a few. 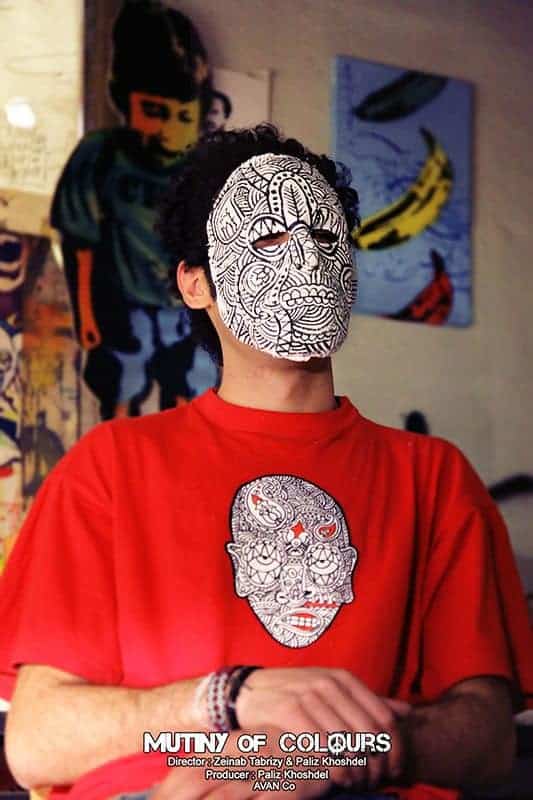 The Mutiny of Colours documentary relies heavily on public contributions and while it is an on-going work, starting off in 2012, they are still looking for more funding.

Street art has proven itself to be a true expressive art form. It is not an inferior form of political outcry nor is it the indifferent rebellion of a disaffected youth. Street art thinks, feels, and evokes thought and emotions in the people that view it with an open mind.

Take a look at their compelling trailer and consider a small donation.  The cause and consequences could be huge for the Iranian population.

END_OF_DOCUMENT_TOKEN_TO_BE_REPLACED

Iran has been in the limelight for various reasons, some of them being nuclear deal conflicts and cultural invasions. The advent of int...

END_OF_DOCUMENT_TOKEN_TO_BE_REPLACED

Tetsuya Ishida – Saving the World With A Brushstroke

Macabre.  Gruesome.  Cadaverous - These words pretty much sum up the artworks of Tetsuya Ishida. However, so do – Visionary.  Surrea...