The History of The @ Symbol

If there is one thing that should be considered a mystery, it is the origin and history of the ‘@’ symbol. One of the most graceful characters on the keyboard, its source, and actual origin is yet to be ascertained.

Asides the fact that is found most times in email addresses, the sign has been in use before the advent of emails, though it was only used then to show the cost or weight of something.

So, with the advent of electronic mail, came the fame of this amazing sign.

Another intriguing thing about this sign is that it doesn’t have a name.

Yes, there are a couple of strange names used to describe this sign, but there is no official universal name for it and many times, what it is called depends on the language, some languages relate it to the name of an animal the sign looks like, for instance, a snail.

In 2010, The Museum of modern art acquired the @ sign as one of its collections, and it was described as a very interesting acquisition.

How is it an acquisition?

How is that even something to be proud of you may ask?

MOMA’s acquisition of @ goes beyond that. It is based on the assumption that possessing an object in its physical form is no longer necessary.

This acquisition will make curators feel free to tag the works and experience them and recognize things that cannot be possessed because of their size or whom they belong to and who can afford them. 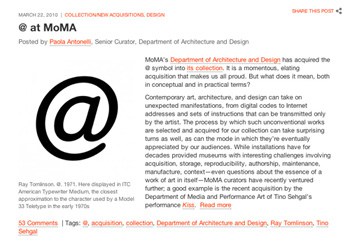 These and some others are the reasons for the acquisition of @ by MOMA and this acquisition has countered most people’s opinion of what a museum should acquire as the reasons and ideas behind it were quite interesting.

A symbol is not just an image but the other sides and uses of a symbol can only be recognized if we make use of symbols in the right way and with the right knowledge.

Being conversant with symbols like the @ sign, allows you to think fast, often thinking majorly in symbols and images. Through working with symbols, you can have access to experience the inner world and its meaning.

Symbols communicate better than words and do it directly

We live in a world of symbols. A symbol can be anything, however, symbols usually represent an idea. You probably patronize a certain brand because the symbol which represents that brand is one you’re familiar with that you see all the time.

We interact with symbols daily and our mind builds ideas that we are not consciously aware of. Without symbols, like the @, it would be quite a daunting task to make sense of the world around us.

The meaning of the @ symbol may be tweaked depending on the language, or its history in an environment or the contextual intent.

Though it is often said that symbols have made people lazy with speech and most especially writing, the value that symbols like @ add to our world cannot be overemphasized.

The @ sign came into existence first as a scribe’s fast way to write the Latin word ad, especially while compiling a list containing the prices of commodities. It is commonly referred to as ‘the at sign’ or ‘the at symbol’.

Though in some other languages, this sign has acquired many nicknames, none of them is recognized in English for now.

The History of the @ Symbol

It is speculated those medieval monks for want of shortcuts while copying manuscripts, seeing as there were no printing presses, and every letter of a word had to be carefully transcribed through writing, for every copy of a published book. They converted the Latin word ‘ad’ which means toward “a” with the back part of the “d” as a tail. It has also been said that the sign came from the French word for “at”, à and the scribes, working towards being more efficient, made an extension around the tip and the sides.

Another team of researchers has come up with the idea that this symbol came from an abbreviation and was used to represent ” each at” with the “a” being enclosed by an “e”. Its first record of use was in 1536 by Fransisco Lapi, a Florentine merchant who made use of the symbol to signify how many units of a wine amphora ( a unit of measurement), were shipped in large clay jars.

The symbol went on to take on a very vital role in commerce and has been in use by merchants to mean ” at the rate of” – for instance, 2 packs @ $20  would simply be saying, 2 packs of the commodity would go for $20.

The machine age wasn’t favorable for @ as typewriters in the mid-1800s didn’t make use of @. It was also not among the symbolic array of the earliest punch-card tabulating systems first used during the 1890 US census, in the years leading up to computer programming.

The unfavorable season came to an end for @ in 1971, when Ray Tomlinson was faced with a problem of developing a way to link and connect computer programmers. His challenge, however, was how to successfully address a message created by one person and sent through Arpanet to someone using a different computer.

He figured that the address would require an individual’s name as well as the name of the computer which might serve many users. The symbol separating those two address elements was not yet widely in use in programs and operating systems to prevent computers from getting confused.

Tomlinson set his eyes on @ placed conspicuously above “P” on his Model 33 teletype. According to him, he was mostly looking for a symbol that wasn’t used much. There weren’t many viable options, an exclamation sign, a comma or even full stop or an equal sign could not be used because it wouldn’t have made much sense, so he settled for @ – “saving it from going the way of the “cent” sign on computer keyboards”, he says. In other words, the @ sign wasn’t going to be allowed to sit dormant. With his naming system, he sent himself an email that was sent from one teletype in his room, through Arpanet, back to another teletype in his room.

The @ sign separates the person from the machine for the internet and the email as well, it complied with Tomlinson’s requirements while he searched tirelessly for something to separate addresses and couldn’t make use of letters or a number.

If there would be any symbol going out of use anytime soon, it is not the @ symbol, the at-sign has come to stay and is very much established. The history of the @ symbol isn’t that something we reflect every day, but this symbol has become a very vital symbol in the technology world, used on social media and electronic mail to signify and differentiate addresses.

Tags:
humanity
Newer 15 Most Famous Rembrandt Paintings
Back to list
Older 14 Paintings Around the Theme of Death in Art