Infographics : A Brief History and Introduction to Comics

With comic book movies killing it at the box office and both major publishers doing a reboot in the same decade, comics are more relevant than ever. Despite the fact that they are so popular today, very few people seem to know where comics come from and how they have developed over the years.  Let’s have a look a brief history of comics through eight critical historical milestones of this medium. 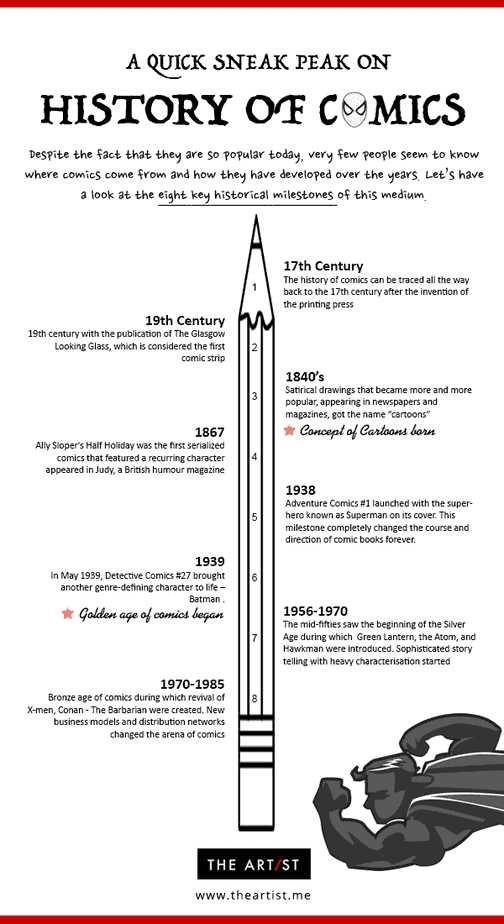 Mainstream comics are still going strong and are gaining more and more popular because people are getting interested thanks to the wide plethora of movies, video games, and TV series we see. A few historical events have forever changed the course of the medium, which is always interesting to behold.

What would’ve comics looked like today if people hadn’t embraced the superhero concept? What kind of comics would we be reading? Would there still be comics at all?

Based on the fact that the industry has been so resilient over the years and is still here, we would say that it’s entirely possible. We can’t wait to see what will happen next.

A Brief History and Introduction to Comics

The history of comics can be traced all the way back to the 17th century after the invention of the printing press.

However, what we today recognize as a comic strip would not appear until the 19th century with the publication of The Glasgow Looking Glass, which is considered the first comic strip.

Indeed, there is an argument to be had, but one cannot deny the fact that it contains all elements we know, love, and recognize from modern comics – it incorporates satire, uses caricature, employs the use of thought bubbles, and is a continuous narrative represented through a series of pictures with captions.

A bit later satirical drawings that became more and more popular, appearing in newspapers and magazines, got the name “cartoons” during the 1840s.

Ally Sloper’s Half Holiday was the first serialized comics that featured a recurring character. It appeared in Judy, a British humor magazine, in 1867, and was created by C.H. Ross and illustrated by his wife, Emilie de Tessier.

Comics started to slowly grow in popularity and the industry started to thrive in the 1920s and 1930s. The Adventures of Tintin was born in Belgium, coming straight out of the mind of Georges Prosper Remi, more widely known as Herge.

In the meantime, in Britain, The Dandy and The Beano also opened the market to children through childish humor and storylines.

In 1938, Adventure Comics #1 launched with the superhero known as Superman on its cover. That was the year that completely changed the course and direction of comic books forever.

This is the direction we’re still following to this day.

Everything you see on the big screen right now stems from the popularity of the character at that time.

He served to define the genre of American comic books. It’s true that the genre saw a dip in sales and popularity in the 50s, but it quickly reclaimed its positions in the 60s.

In May 1939, Detective Comics #27 brought another genre-defining character to life – Batman.

Soon after, many other comic book characters would be created, which would give birth to the entire multiversity. Thus the Golden Age of comic books had begun.

During the Golden Age, comic books thrived. Comic books provided cost-effective entertainment and were popular among many different age groups. However, after World War II, there was a great dip in the popularity of superheroes.

While the most popular characters like Batman and Superman continued to sell, many others that hadn’t been established yet (like Green Lantern and the Flash) at the time were canceled.

The industry still expanded through different science fiction titles, such as Mystery in Space.

The industry saw some problems in the 50s. The numbers started to take a dip because of several factors.

Sales suffered from all the scandals, and Comics Code Authority, which was established with the aim of reducing juvenile delinquency and other problems caused by comic books, didn’t help.

In the mid-50s many people blamed comics for different youth-related problems. Parent groups help public comic book burnings to do away with comics. There were even bans in some cities. The industry took a huge hit.

Around the same time, TV was also an emerging form of entertainment, which competed with comic books for the time viewers. TV was innovative, fresh, and interesting, not because the programs were so good (the story-arcs in comic books at the time were far more interesting), but simply because it was a relatively new technology coming to the public.

The industry managed to persevere, though. The mid-fifties (1956, to be more precise), saw the beginning of the Silver Age. Many scholars believe that the rebirth of the Flash in Showcase #4 also gave the birth of the new age.

The Silver Age would be characterized by a new type of superheroes.

In 1961, Stan Lee and Jack Kirby created the Fantastic Four, which, despite the atrocious movies we’re now forced to watch, is one of the most influential comics of that time. For the first time, superheroes were humanized and given inner demons to fight and conquer, aside from the villains.

This was considered a revolution at the time because it hadn’t been done before. This made superheroes like Spider-man, Fantastic Four, and the X-Men a lot more relatable, especially among college students who could relate to the heroes and the problems they were facing.

The 1970s would (figuratively speaking) give birth to the Bronze Age of comics.

The transition wasn’t as sharp as the one between Gold and Silver Age and not all characters entered it at the same time. The timing is also quite speculative, though it’s widely accepted among fans and scholars.

The Bronze Age brought a lot more substance to the comics.

They began to provide social commentary and tried to tackle popular issues at the time, such as drug abuse. During the Bronze Age, we also so the revamping of some characters with some more serious and darker undertones.

The industry was thriving again and even saw the birth of the first specialized comic book stores.

The darker undertones that started with the Bronze Age transitioned in the Modern Age.

The creation of Alan Moore’s Watchmen and Frank Miller’s Batman: The Dark Knight Returns served to cement this. Both comics were critically acclaimed and saw huge sales.

In fact, they are among the most influential comics to this day. The darker tone of DC’s cinematic universe can be traced to the success of those comics, and the director of Batman v. Superman: Dawn of Justice (which is loosely based on Miller’s masterpiece) is the same director who brought Watchmen to life on the big screen – Zach Snyder.

The popularity of antiheroes like Wolverine and the Punisher began to grow because of this.

Mainstream comics are still going strong and are gaining more and more popular because people are getting interested thanks to the wide plethora of movies, video games, and TV series we see.

A few historical events have forever changed the course of the medium, which is always interesting to behold.

What would’ve comics looked like today if people hadn’t embraced the superhero concept?

What kind of comics would we be reading?

Would there still be comics at all?

Based on the fact that the industry has been so resilient over the years and is still here, we would say that it’s entirely possible. We can’t wait to see what will happen next.

Tags:
cartoons, comics, drawing
Newer What is Dadaism or Dada Art?
Back to list
Older The Surreal World of Salvador Dali

END_OF_DOCUMENT_TOKEN_TO_BE_REPLACED

10 Most Famous Paintings by Pablo Picasso

END_OF_DOCUMENT_TOKEN_TO_BE_REPLACED

Understanding art can appear intimidating to the untrained eye. However, there are several simple key principles of art, and once you u...

END_OF_DOCUMENT_TOKEN_TO_BE_REPLACED

Popular culture was shrouding everything in the 1950’s and 60’s in America, and maintaining the status quo became more important than e...